Where does the name “French Bulldog” come from?

French Bulldog, despite its name, was bred in England. In the 19th century, breeders decided to create a companion dog breed that could be easily kept in an urban environment. Craftsmen, seamstresses, lace makers did not miss the opportunity to

acquire a mischievous pet, which pleased the owners with a light disposition and funny habits. To breed such a dog, breeders selected the smallest English bulldogs, crossed them with terriers, pugs. This is how the modern breed came about.

Although some believe that the French Bulldogs were bred from the English Bulldogs, and served as small-format fighting dogs. But with the help of British lovers of the French Bulldog breed, not interested in dog fighting, the French gradually pulled out of the line of dogs being pitted against each other. Only the elite of France could afford this dog. At this time, Paris was already the fashionable capital of the world, so the whole world soon learned about French Bulldogs. In 1890, the dogs were brought to the United States, and after 7 years the FBDCA (French Bulldog Club of America) was established. In France, this breed was first registered, where the name “French Bulldog” was given. However, there are other opinions on this matter. 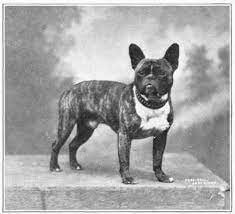 In the second half of the 19th century, the demand for manual labor greatly decreased due to the rapid development of manufactories. Many English workers moved to France with their beloved dogs. According to another version, traders brought the bulldogs here. The good-natured character, the ability to catch small rodents and unusually large erect ears instantly riveted the attention of the French public to this breed.

Originally these dogs were called Bouledogue Francais, but at the beginning of the 20th century the name was changed to French Bulldog. For the first time, French Bulldogs are presented at a dog show at the Westminster Kennel Club in 1896. In America, the French Bulldog is becoming a very expensive breed of dog. The dog cost from $ 250 to $ 750 (which was more than the cost of the “people’s” car Ford Model T). In the early 20th century, several dogs were sold for $ 5,000.

There is a beautiful legend that a French bulldog named Gamin de Pycombe, being a pet of one of the passengers of the Titanic, managed to escape from a shipwreck and even find a new owner. However, this is only half the truth – archival records confirm the presence of a bulldog on board, but he did not manage to survive. Since the dog was insured, its owner received an impressive compensation – more than $ 20,000.

This is a demo store for testing purposes — no orders shall be fulfilled. Dismiss